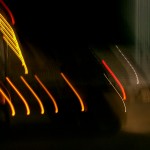 So I hardly thought about Trix while we danced, except when she distracted the corner of my eye.  And she wasn’t exactly on my mind as Chris and I tugged and tore at each others’ clothes before we even got through the apartment door back home. Our kisses fervent, our fingers clumsy, we had sex leaned over the telephone table by the front door. When he not-quite-gently yanked back on my hair, I could see his face in the mirror, screwed up a little tighter every time he thrust. The power there took my breath away.

Afterward, Chris cooked and I yawned into my hands at the kitchen table. The clock declared 3:03 am, so pancakes seemed like the thing to do, though maybe sleep was winning out. That was when my mind wandered back to Trix, and I realized that her whisper still lingered in my skin. Her advances had felt unmistakably sexual in nature, and I had to admit, I didn’t mind. I’d been with a couple of girls before, sweet kisses and exploring fingers, but no one like her. Ethan hadn’t minded me exploring with girls – he liked to hear about it, or watch. In fact, he was pretty lenient about flirting in general, though I suppose it didn’t serve him in the end, considering where I was now. That made me wonder suddenly how Chris might react to similar dalliance. He was not the kind of guy to bode competition – he felt the pride of my full allegiance. I felt a little pang of loss. Of course, based on tonight’s evidence, Chris might at least find it amusing to watch me flirt with girls. I decided I should ask him but as I opened my mouth, he beat me to the punch with his own direction.

“So how did you like your first Friday night out in the big city? Hey, I think that might even count as our first official date!”

“That’s weird, isn’t it? We’re like, living together but we haven’t even been going out? I’m still really amazed I’m here.”

He looked up sharply. “No regrets?” he asked, like he really wanted to know. I squirmed around the truth.

“Well, I wouldn’t say that, exactly. I wish I hadn’t had to break Ethan’s heart, for example.” It had seemed like a good, easy truth to start on, but he glared at me angrily.

“You can’t feel sorry for him? After what he did?”

Now it was me who didn’t want to talk about something. I switched direction fast.

“So, yeah, well…the club was fun. That Trix is pretty intense! How do you know her?”

Chris shot me a look that said he knew exactly what I was doing, but he was going to let me change the subject…for now.

“I know her through Bashir, or Bash as she introduced him. He was my office mate, and we T.A.’d a class together before my secondment. I went to their wedding.” He sounded a little too nonchalant for the grin tugging the left corner of his mouth. I decided to fish a little, let him have his fun.

“Who’s wedding? Don’t tell me Bash is married to that blond?” I probed. He broke into a grin, abandoning the straight face.

“No, Bash is married to TRIX!” He couldn’t hold back his loud bark of a laugh, the one that burst out like the world’s craziness took him by surprise. “They went ahead and did it – they got hitched last June.”

“What? But I could have sworn…aren’t they both gay?” was what popped out of my mouth.

Trix was married? Really? I could usually tell a hag-fag from a boyfriend, and that man was no boyfriend, at least not to her. And Trix – I didn’t see how I could have misread that. I’d felt her hot breath on my neck as a mating call. She couldn’t have been clearer about her orientation if she’d worn a chick-magent t-shirt.

“Well, sure, but it got his parents off his back about marrying a nice girl. Interesting, right?”

This was my chance to see what he really thought, so I pounced on it.

“Yes, especially since she was all over me. How did you feel about that, by the way?”

“Huh. Well, maybe she was just trying to make someone jealous.”

“Gee, thanks. But I mean, how do you feel about her coming on to me? How would you want me to respond to that?”

Chris held back his answer, busying himself at the stove. He hadn’t expected this conversational direction, and I wondered if he felt disappointed in me, or even jealous himself. But maybe he just didn’t hear me, because he flipped the last pancake from pan to platter, spinning back to present the lovely, steaming mound with a smile of pride. As he moved around me, I grabbed a pancake before the stacked plate could hit the table.

“Ow!” I yelled, dropping it in my lap. Instantly, Chris swooped and scooped the offending dough with a wrist-flick toss into the sink, making a perfect basket.

“Watch out, don’t burn yourself!” he laughed. He lifted my fingers and blew on them softly. I felt touched by the gentle breeze of his breath, the strangely tender shape of his mouth, his shyly downcast eyes. I felt a surge of love. He kissed the tip of my tallest finger, then deposited a brown bottle on the table with a flourish.

“Only real maple syrup in our home,” he proclaimed. He was often thoughtful in the details.

Those pancakes were beyond good. I felt so hungry, and there was nothing in the world that I would have preferred in that moment. I let my attention sink into them, my nose filled with aroma, my mouth warm with golden flavour. I lost track of the conversation.