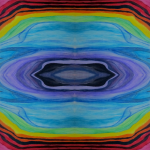 I had never ridden a motorcycle before, and this weather-worn Indian didn’t inspire confidence.

“Oh, quit making faces! She’s a classic. Would you rather take the bus?” Trix asked rhetorically. I debated telling the truth. She threw me a helmet that felt huge and awkward, crouching nimbly at my feet to fasten the band under my chin. I felt like I did when they put a hockey helmet on me to ride my tricycle – ridiculous.

I’m not sure why she thought that particular piece of information might endear the helmet to my heart. She had to try a few times to start the bike, and did so with a bouncing vigour of certainty that the next one would take. Putter to roar,the machine jumped a little under her, like a living animal. She flashed me a wide smile.

I clamoured up behind her, my arms flopping uncertainly. She reached around behind and grabbed my hands, wrapping them securely around her waist. With no further preamble, we spurted off into the night. As we rounded a corner, I felt her tight abs contracting under my fingers, even through the jacket.

“You’re tickling me!” she shouted back in the wind.

Weaving around and between two cars, she called, “It would really help if you leaned with me.”

“Lean with me! When I lean, lean the way I’m leaning!”

It felt like dancing with my uncle on a terrifying roller coaster, but soon I began to get the flow. We moved as one through harrowingly close traffic. Trix didn’t slow down at all unless she had to – she liked to keep to a gear. Moving out of downtown, we rode along the waterfront. I could picture us from the side-view, blue light and moon shining background, like the poster for a movie. My hair flowing back in the wind, her sleek body bent over the handlebar – I liked to see my life that way, as moments captured in ads about how great my life was.

Constant rumbling under me,up tight against her strong back while the world flew by, I felt my blood flowing. I experienced a fleeting desire to reach up and hold Trix’s breasts cupped in my palms, though of course I didn’t. I felt that I was embracing her, not just holding on, creating an intimacy between us. My jealousy piqued thinking she rode this way with Trace all the time. The ride that had started out harrowing almost became relaxing just as we pulled up outside the “century home” walkup where Chris and I shared the third floor.

“Whew!” I exhaled, my legs shaking a little as I stepped off. I stumbled, and almost fell, but Trix was there to catch me. I held her arm for balance while I took off the helmet and shook a tangled mass of hair from my face. I couldn’t even drag my fingers through it.

“I’m a bit whoopdazzled from that ride.”

She laughed with me. “Whoopdazzled? I like that. Good album title, maybe.”

She tied my helmet to the back of the bike. I watched her bend, still feeling her torso hum solidly under my palms. Her physicality spoke to me. I found myself thinking, if this were a movie, and she were a man, she would turn and kiss me right now. Trix turned just as Chris’ loud laugh roared from the open window above. He must have company, I thought. Shit. I was not in the mood for people I didn’t know. I delayed going up.

“Do you want my cell number? I mean, we can’t have you emailing Chris every time you want me.”

“Um, what about your number?”

“I know how to find you. You can get me on email.”

“You won’t give me your number?”

I noticed I had two texts waiting – Chris probably wanted to know when I’d be home. The other was from Ethan and I didn’t even look at it.

“So how do I reach you? Call? That seems…rude.”

“Either I’m available or I’m not. Messages just add to the noise. Call back twice, fast, and I’ll figure it’s important and answer if I can. So don’t call twice unless it’s an emergency. Got it?”

“Are you okay with the world the way it is, Mouse?”

What? Where did that come from? I watched myself blink blankly. I thought, and said, “The world is the way it is. What’s that got to do with me?”

My tone sounded too dismissive, a bluff. I felt foolish the instant it came out. I often regret thinking and saying simultaneously – sometimes I end up stuck with a position I don’t want to defend.

“Aren’t you in the world?” she asked, slightly teasing. I felt my guard rise.

“Yes, but it’s going to go on just the same with me or without me.”

“You don’t think you can make a difference?”

“I don’t mean that, exactly.” I felt frustrated. “Look,” I burst out, “I get confused when I think about this kind of…existential stuff. I feel upset, so mostly I just try not to. I know that makes me shallow.”

I could hear how defensive I sounded.

“Shhh, don’t stress!” Trix cooed. Her brow furrowed as she leaned in closer to my face. “It’s just conversation.”

I noticed my breathing came light and fast, my jaw tight. I relaxed my cheeks and temples, and allowed my brain to rest down in the cradle of my skull. I breathed in. I breathed out. Trix watched me, curious. Our pupils clicked in.

“You’re an interesting specimen, Mouse,” she stated. I felt it as the height of compliment. She shook her head as though to clear it. “And yet, I have places to go and people to shmooze still tonight. So I’ll see you at practice tomorrow?” Trix’s tone demanded only one response, but I couldn’t bring myself to give it. I was still feeling confused and a little high from the ride. I knew better than to take on commitments in that state.

“Trix, I have to see, okay? Let me listen to the music. I have a life to rebuild,Chris…and I don’t know if I can take this on. I think I want to, but music is complicated for me, I can’t think when I’m in its grasp, you know? You’re so…and it’s all really…but my head is too full.”

I’d said a lot of nothing. She waited for more; I blinked first.

“Look, if I don’t come tomorrow, can I come anyway another day? Or is that it, I’m blackballed?”

She smiled a little sadly. ” ‘If he came yesterday and we weren’t here you may be sure he won’t come again today.’ ” I suddenly remembered playing Quotes with my dad on long bus rides. I really wanted to get the quote.

“Waiting for Godot?” I asked, not at all sure I had it right. She just smiled again. I felt so irritated I wanted to stomp my foot. “Fine, but what do you mean?”

“Whenever you come, we’re there. I have the cheese – I saw how you held that guitar, sweet Mouse. You’ll be back. But, I hope you come tomorrow.”

Trix leaned in fast and kissed my cheek, then motioned me to the door. She was going to wait until I got inside, as we’re taught a polite date will do. I found it pretty charming.