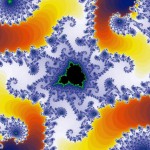 I woke up groggy, messy and grumpy. I could see Chris across the room at the computer, slightly blurry, his back to me. For all intents and purposes, we really shared just one room. A flimsy half-wall and cupboards partitioned the kitchen, and the bathroom did have a door, so by city standards it qualified as a “three room” apartment. Still, the space offered little scope for privacy.

“You’ve got email,” called Chris, and I felt a burst of righteous anger.

“What are you doing in my inbox?” I demanded, my tone edged with a slight screech.

“Calm down,” he sighed, already exasperated with me. “It’s in MY inbox, for you. Come read it. I won’t look over your shoulder.”

I felt ashamed, and irritated with him for letting me stay ashamed instead of helping me laugh it off or giving me a hug. Didn’t he care about me at all? He went into the bathroom and shut the door. I cursed that we were already off on the wrong foot for the day, and it was my fault.

I read the message on the screen: >Chris,Tell her 2 come 2 Timeless, 1pm bring guitar XXOO-Trix

How presumptuous. I really wanted to go, though. I wanted to see what her music was about. She interested me; well, honestly, the way she moved her body compelled me. I wanted to see more. I tried the bathroom door and found it locked. I felt a pang – he locked me out? But maybe it was just habit. I stood outside and called out, “So, what’s Timeless? Should I go?”

’But, how will I get there?“ I asked through the door.

“Really, Christine, I said I need a minute in here, okay?”

I flopped on the sofa to wait him out. I couldn’t believe it when I heard the shower turn on – some minute! I closed my eyes and practiced my meditation, music floating through my head, my breath even, present in the moment. In. Out. My irritation dissipated. In. Out. I fell asleep.

Eventually, Chris opened the door, startling me back to reality. Steam escaped in a whoosh as he stepped out. I felt struck by his white, muscular chest, like the ivory statue of a lovely man. Glistening water droplets beckoned from his bushy little mid-chest soul patch, begging me to lick them away. I didn’t resist, and he moaned a little with pleasure, putting his arms around me. We held each other a long time.

“Sorry I was a grump,” I whispered into his damp, curly armpit hair. He smelled like soap and water, clean and warm. He didn’t reply, but gripped me a bit tighter and kissed my shoulder. We separated slowly, and then I felt him shift back to business as he moved sideways, sweeping up my clothes from where I’d left them on the floor the night before. He tossed them into the hamper, picking up where we’d left off.

“Timeless is the old art-house theatre where Trix and Traces plays, mostly. It’s downtown – the wrong side of the tracks. It’s far. Three buses.”

From his dresser drawer, Chris selected the top t-shirt, shook it three times and slid it over his head. muffling his words. “They gutted most of the chairs to make a dance floor, and opened up the lobby for lounging and gaping. It’s a pretty cool place. Though in the afternoon, I imagine you’ve been summoned to band practice. I’m sure you should be honoured,” he added cynically.

Chris walked to the kitchen, looking fresh and ready to face the day, while I dragged my bedraggled self behind him, wrapping the blanket around my shoulders like a cumbersome robe.

I expected a joke, or a tease, but he looked down at me seriously.

I didn’t reply right away. I debated different ways to answer before settling simply on “Yes.”

Chris’ eyes squinted a little as he looked into mine. I wondered what he was looking for. Whatever it was, it seemed clear he didn’t approve.

“Look, why don’t you just tell me why you think I shouldn’t go, instead of beating around the bush?”

“I didn’t say…” he started, taking in a breath, “Okay, well, here’s the thing. Trix is all drama. She makes drama in the air by breathing. She’s like a tornado of craziness. Maybe you need some more drama, I don’t know. I mean, you just left your ex to move here with me after a few months of flirting over coffee – isn’t that enough drama for now? I want to settle in here and figure this out together. Don’t you?”

“Look, it’s not that I don’t get why you might want to check it out. Maybe you’re looking for one more chance to show Ethan he was wrong, that you still have a chance to be a star?”

That’s what he thought this was about? I felt a prick of irritation that he would presume to say it, especially since Ethan wasn’t wrong.

“What? Quit analyzing me!” I brought us back on point. “I’m not joining the band. I’m just going to see what I can see. You know I can’t even bring my guitar – Gretel’s completely banged up.”

In fact, I couldn’t bring any of my three guitars. Ethan was holding two of them hostage in my old apartment – a Les Paul knockoff he’d handed me down, and my prized classical acoustic. My precious show-quality Gretsch, “Gretel” got damaged in the move; actually, Ethan threw her down a flight of stairs behind me the day I left. I still had the yellow and green bruise remnants and a jagged scar; a sickening, vague reminder that I was always letting everyone down. But unfortunately, I’d stumbled again upon that sore point with Chris.

“Not just banged up! The guy threw your guitar at you down a stairwell. In a violent rage!”

“It’s not that simple. We were always together, through high school and college. Then I said I didn’t want that anymore. Of course he got upset.”

“Don’t minimize what he did. You got stitches on your leg, and it was me with you at the hospital, remember. I can’t believe you’d defend him.”

“Yeah, well, Gretel is broken, and Ethan’s holding the other two hostage, so…”

“So, anyway, I’ve got no guitar. I just…I don’t know anyone here, I’m totally outside the scene. Then this band lands in my lap. I want to stay…open. You know? To possibility.”

Chris’ eyes clouded with perplexity. I wished I could give him more to go on, but I didn’t know what he wanted to know. I wasn’t hiding anything – I had told him my reasons as clearly as I knew how. He seemed to arrive at some conclusion on his own, because he sighed.

He ruffled my hair, kissed the top of my head, and headed for the kitchen. He didn’t offer to come with me.