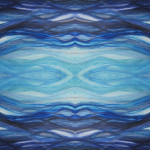 I opened the downstairs door to a sweet, cloying smoke only hinted at from outside. I felt a little happier just breathing the enhanced air. It felt like being young again, as if I weren’t still young. I started to generate interest in meeting a few of the characters Chris had talked about during our getting-to-it stage. I wondered who might wait inside.

Chris sat on the floor, leaning against the leg of the sofa, spacing to the music. Above him, a serious-looking, large-nosed, sandy-curled woman lounged, her feet resting on the lap of an adams-appled dork with eyes smoked half closed. This must be Freida and Tim. Freida worked with Chris at the university research lab and competed with him for position. Tim was The Wife.

On the floor across from Chris, a darker-hued beauty leaned back against the legs of an all-American linebacker, his fingers playing in her hair. Rekha and Lance, I decided. Rekha was The Wife, like me and Tim, but unlike us, she actually was a wife. Diamond and band. Chris had described Lance as a super-genius perfect-man, and Rekha – smart, beautiful and talented – as his deserved prize. They looked the parts. Rekha held out the joint and I took it before sitting down beside Chris.

“Look what the cat dragged in,” Chris joked loudly. Did he know about the Mouse nickname?  I searched his face but found only friendly pot-slackness. “Christine, this is Freida and Tim, Lance and Rekha.” He pointed around at the couples, proving my first assessment correct. Tim, who was closest, reached up to shake my hand. I shook, but I felt awkward – was I supposed to shake hands with everyone? Instead, I waved in a friendly way and met each person’s eyes. That seemed sufficient. I sat beside Chris and snuggled into his arm as I toked. It had been a long time, so the buzz hit me right away, softening muscles I hadn’t realized were strung tight. I felt nice.

I passed the joint over my head to Freida, who briefly interrupted her stream of tepid debating for a puff. She and Lance seemed to be discussing a book they’d both read.

“Basically, he wants us to read his apologies and agree that it doesn’t matter if he failed and made a mess, because he learned.” Freida sniffed, then yawned.

“That is what it’s about, isn’t it – we mess up, swallow our shame and try to be honest and methodical about figuring out what went wrong. That’s the data we use to build our models, so we need people to reflect on it, write about it,” countered Lance.

“But really. Does he think he’s personally invented fire when he rubs two sticks together? His findings are all derivative of other people’s work that he just suddenly understood.”

Chris broke in, the Master of Being on Both Sides at Once.

“It’s how he brings it together and shows it in the field – that’s what I find interesting.”

Cache. Shit. I felt anxious and relieved at the same time. I had sort of blocked out that he supervised Chris’ project at the University. My psychologist for two years in junior high, Cache had subsequently dated my mother for a year when I was sixteen. Not my favourite person. He was always so insinuating, like he knew me better than I knew myself, when really, he just saw what he was looking for.

The relationships weren’t entirely coincidental. When Chris started his sabbatical at my home-town university last year, Cache sent him to the orchestra’s Christmas performance and asked him to deliver flowers for me backstage, “for old time’s sake.” That card upset me, and Chris’ awkward attempt to understand my stammered explanation touched me like a sweet compliment. Ethan was away for the break. I agreed to go out with Chris for a drink. The rest was history – or, now, the present.

It hadn’t occurred to me that I might be expected to socialize with this man Cache, who knew too much and not enough about me. It kind of made my skin crawl. I felt like an idiot for not considering it sooner.

“So where have you been tonight, Christine?” asked Rekha, companionably interrupting my fret. It took me a few seconds to clue in, and in the meantime Chris answered for me.

“Christine spent the day at Timeless.” He raised an eyebrow theatrically, like he was holding out a tantalizing tidbit.

“Don’t be harsh, ” admonished Tim without opening his eyes. Frieda ignored him.

“He seems to really love her.” Rekha spoke more to herself than the group.

Chris laughed loudly. “He’s gay, people. They both are. The whole thing is a sham.”

“Maybe he feels it’s the best he can do,” Rekha debated mildly, sticking to her position without challenging his.

And Chris backed down. Chris, who liked to debate a side until drained dry of debatable material, hung his head and said, “Yes, you’re probably right.” I looked back and forth between them – there was an undercurrent there that I didn’t understand.

“Hey, maybe Trix is a man,” Lance wondered out loud, his voice excited by a new theory. “She looks kind of like a transvestite. That would explain a lot – like how her tits are never the same size twice.”

Chris jumped in, ready to engage that. “No way. Do you really think she could hide a package those outfits? She’s just a lesbian, no more no less.”

“Well, she somehow sunk her claws into our Bashir,” observed Lance, leaning forward to take the joint from Tim over top of my head. I ducked away, afraid of ashes. “It’s true that Trix is not exactly the university wife to help him get places,” he mused. I snuck a glance at Rekha. Presumably, she was that kind of wife. I wondered what she thought of that.

“Why not?” asked Frieda with feigned innocence. “It’s not like she’s uneducated. She did go to acrobat school.”

“Really?” I asked before I meant to, oddly tickled at the idea of such a thing as acrobat school. The next second I realized Freida must have been kidding. Embarrassment creeped over me – I let my inhibitions down and now I looked foolish. But Rekha nodded.

“Yes, actually. Trix’s parents defected from a touring troupe. They started an acrobatics school in a warehouse to earn their living, and it became quite prestigious. Trix grew up there.”

“You know her, then?” I asked. Rekha smiled ruefully, and answered carefully.

“Yes, I have had spent some time with Trix.”

I wanted to know why, but Freida could not be distracted.

“In any case,” Freida’s hand waved away my interest in acrobatics, intent on sharing what was really important. “Cache told Bashir, in front of me, that Timeless is a waste hole, going nowhere for research, and he should be applying his capacity to systemic global issues. You can’t deny his leaving has slowed down our work so he can hang out and fiddle around on a guitar all day.”

I was having a hard time piecing together this conversation, but I couldn’t find a productive question. I didn’t want to sound stupid. I knew, at a basic level, that Trix’s bassist Bash, or Bashir to this crowd, was also the forth member of Chris’ research team at the university. Chris, Freida, Lance and Bash, with Cache supervising. The project was in “Global Human Systems,” or something – it sounded a little ominous to me, especially with the good doctor involved. I had no idea what any of that had to do with Timeless, besides the fact that Bash was in the band.

“Has Bash left the university?” I asked, confused.

“A sabbatical,” corrected Lance with a hint of doubt. “He got permission for a special project. Timeless is… I don’t know. Like an experimental lab, or a tribe he’s observing.”

“Didn’t you notice Trix’s minions at that sweatshop?” demanded Freida. “She recruits kids with nowhere to go, indoctrinates them and exploits them, all for her deluded dreams of grandeur.” Professor Freida warmed to her topic. “I would have thought Bashir was smarter than to get sucked in. I’m not sure what he hopes to gain in this scenario. At least it bumps me up on the list for field placement.”

I wondered briefly where Chris fell on that placement list. The possibility of living abroad remained a shared ambition.

“It’s not quite like that, Freida,” Rekha responded quietly. “They’re doing some good work. They’re changing the course of lives.”

“To what end?” interjected Chris unexpectedly, “And by what means?”

I felt surprised. He seemed torn, his voice betraying uncertainty. I’d never seen him uncertain. This loaded conversation had me flummoxed – obviously I’d missed some connection. Were they saying Timeless was some kind of experiment?

“What they’re doing,” reflected Rekha seriously, “it’s not orthodox, it’s not tested, and it’s not guaranteed to do anything. But harm? I don’t think they’re doing harm. At least, if they are, it’s no worse than the alternative for anyone involved.”

“Well,” mused Chris, almost to himself, “they’re almost out of time to find out one way or the other.”

Freida perked up. “Why, Chris,” she asked, intrigued “Do tell. Why would they be short on time? I thought they were funded?”

Chris looked embarrassed. It seemed to me like he accidentally came too close to something he’d meant to stay away from. Maybe Bash had confided in him, something he shouldn’t share with this gossip circle. Part of me wanted to jump in and save him, not to mention save Trix from this strange and cutting conversation. But I also wanted to know what he knew, and I wanted to know if he’d tell it. I waited.

Rekha saved him in the end, by turning attention my way.

“What took you to Timeless, Christine?”

A good question. Much the same thing I wanted to know about her. I hardly knew the answer. Yesterday I’d never heard of Trix, and tonight I felt as though she and Timeless had encompassed my whole world in a day. I wanted to choose my words and get my tone right. It felt very important that Chris’ friends see my interest as anthropological and not devoted convert. I didn’t want to share too much with these people. While I prepared to speak, Chris jumped in.

“Trix was hitting on Christine at Baloo’s last night, right in front of me, no less. Then she got a VIP invite to band practice today. My girl has a soft spot for showy rock-based electronic rebel-pop.”

I could probably have predicted the conversation from there, but I had to stop listening. Chris was getting restless, too. He could ride a social gossip wave for fun, until it got old or uncomfortable. He had probably introduced musical genres to distract people into boredom so they would leave. I could almost hear him judging the prattle while providing all the expected responses with forced gusto.

Retreating from the conversation in my mind, I suddenly realized that Chris had created this social gathering for my benefit, and because I came home late, he’d been entertaining our guests for awhile already. Of course, if he’d told me…oh, maybe the text I missed. Still, I felt blindsided. It wasn’t anything in particular he said or did, but over the course of conversation I noticed him inch away from me, just slightly, claiming a little more space and resettling. I’d come home too late. He was irked with me.

I felt tired and a little muddled, and I wanted to spend some time online. I couldn’t understand why he didn’t just ask them to leave, but it probably would have been rude since I’d just arrived. My mind felt sluggish and reluctant. I desperately wanted to be alone. In a moment of inspiration, I excused myself to the washroom.